The following is a short exploration of the ideas presented in one of the sections of IDEO + Jane Fulton Suri’s “Thoughtless Acts”, which I described in more depth in a previous post.

“We learn behavioral patterns from others” –Jane Fulton Suri The book section on “conforming” has a dozen or so images, each depicting an event or situation that is collective in nature, though indirectly and unobviously so. You are likely confused by the vagueness of this description, so here is an example. I’m currently sitting on a bench at the West Concord commuter rail station, waiting to board the train back home. Waiting –especially in the case of transportation, is a good example of this indirectly collective group experience. In these kinds of situations, as in the social dynamics of arriving and waiting at a bus stop or in an office building while waiting for an elevator, your behavior often depends on your social atmosphere, though you probably don’t realize it.

Waiting for the commuter rail

The first time I thought about this was just a couple minutes ago, as I sat down on this bench in order to wait for the next train. The benches filled up systematically, and I sat down in this open seat after seeing someone else sitting in the far bench and reading a book. I remember the last time I took this train, when more people were waiting around, I walked over to the shade under the Club Car Café, just as lots of other people had decided to wait further away from the tracks and under the shaded area of the café. By the time I’d arrived and decided to stand in the shade, the benches had filled, so I had to make a decision, somewhat subconscious though it may have been. I could either go to the shade or stand by the stone pillars a couple yards away to lean on them as other people were. What would you do? Assuming of course you have no real preference on how you wait around, what makes you choose what you do? Are you more likely to glance at the café menu if you happen to see a man reading it before going into the café? If you see a small child playing with the parking lot meter board, would you pay more attention to it like everyone else, even after the kid is scolded by his mother and moved away? 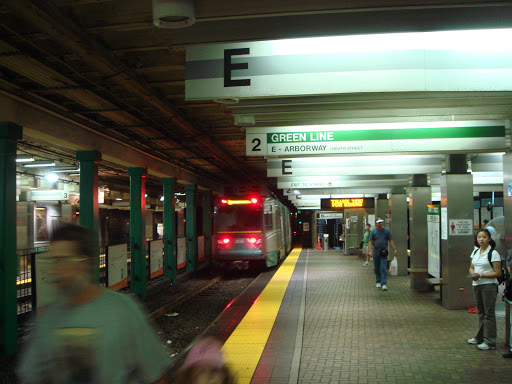 What is the difference between a subway car in the suburbs and one in the city?

We’ve all noticed that there seems to be an untold string of social conditions which will define whether or not we look around, taking in the signs, people, our surroundings, etc. Going from the Eliot T stop on Boston’s D Line in the suburbs into Government Center, right in the middle of Boston, you might notice how others react differently as the subway train environment changes if you pay close attention. Boarding at Eliot, are you more likely to stay inside the weather shelters with the ticket machines if nobody else is at the station? What about where you choose to sit once you get on the subway? Chances are the train isn’t all that full, and the 4-6 people on the train hardly come close to making the train look anything but almost empty. You probably tend to preserve the “appropriate” spacing between you and all others in the car. Unless the 4-6 people all know each other, they won’t all crowd the front of the car.

They will also separate themselves by aboutthe same distance that the first two people in the car are separated by. The same way, if you are in a near empty subway car and someone walks over and sits almost right next to you when there is a lot of space elsewhere you might question why they came to “specifically” sit close to you, even though they may have made the choice to sit near an exit, for example. How does this change if you board a subway train at Government Center, especially after a Red Sox game when the subway is packed? Avoid eye contact much, drop your normally sharply defined sense of personal space in public, minimize the amount of uncessary movement, take the first open seat you can no matter what, all things you are more likely to do now that everyone else’s primary goal is: get in, find confort, and manage to get out safely. How does your experience as a person waiting to arrive to their destinatio nchange becaue of these external factors? Are you less likely to pop upen your Cosmo magazine or paint your nails now? Likely, but not openly because of your enviroment, though this does depends on the individual. If the act reaches the awareness level of choice, then all bets about collective group behavior are off.

Appeal for reflection/discussion and the elevator video

It is important to remember that conscious thought often rules out this “thoughtless” conforming behavior, but often times we don’t stop to think about where we should sit, how we should hold our hands, or stand, etc. I don’t want to insinuate that many of our actions are necessarily out of our control, but what about actions that we treat as rote, instinctive, universal, spontaneous? What makes these actions instinctive? It turns out that the reasons behind these kinds actions isn’t so much an expected or engrained cultural norm, rather they depend, albeit unconsciously, on other people. Whether or not that lady looks cold, might make you realize you forgot your coat and pull your hands in a bit, or if that young girl over there is walking only on the cement cracks you might look down just a bit more. Maybe, as you can see in the video below, you turn and face the same direction everyone else is while riding an elevator. I found an amusing video a couple days ago. It shows how the direction you might face in an elevator is slowly but surely affected by others around you, even if you may feel confused or odd about the whole conforming process as it is happening to you. Hopefully this embedding works properly.

In conclusion, as I will quote for every section of this blog series-of-sorts, this is how Jane Fulton Suri concludes her book’s introduction:

“There is no definitive interpretation of the observation here or in the outside world. The value is in looking. What do you see?” -Suri

So… what can you see? Alternatively, what do you think about our alleged tendency to conform in a collective group setting?

Note that this is list is relative. An Olin student who hasn’t taken Design Nature yet, or worked…